Any system needs a user interface and this one is no different. Also each system needs a name and whilst "Chicken House Controller" is descriptive, its hardly catchy either, so we need a name, but what to call it. Suggestions came and went, but nothing stuck, other than Domestic Management instructing that the coop is to be known as "Brkingham Palace", since its palatial compared to its predecessor, but that's for the house, not the control system.

The user interface module that's fitted above the main door allows you to see at a glance whats going on and to override the system or instruct it to unlock or lock the various doors. 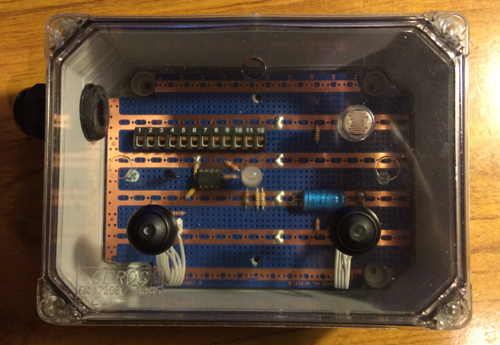 This module is probably the one that i am least happy with, its not visually impressive enough and there is no contrast from the front controls to the PCB. It will, in time be replaced with something better and smaller. The current size is based on the IP68 boxes I could find.

The bottom of the unit has two buttons with a LED in the middle of each, these allow you to instruct the system to unlock the respective nest box so you can collect the eggs, however there are 4 doors on the system, the main door and the pop hole door - the one the chickens pop in and out of, these are also controlled from the same buttons, you just press them in for a couple of seconds to indicate the central doors are to be controlled. The LED's just indicate that you have requested a door to be unlocked and go off once the door is locked again.

The IC within the unit is the external temperature sensor, this allows us to see the real temperature, without any wind chill - since its in a box.

Top right is a light sensor so that we can measure the real light levels and handle things like the inside light when it gets overcast.

In the middle is a tri-colour LED, this shows the status of the whole system so you can check everything is OK

The LED light also changes in intensity during the day, since what is bright for a day is really bright at night, so the LED reduces power at night, which also helps save a few extra milliamps of power.

In a stroke of genius, whilst trying to find a way of checking that the software hadn't crashed and whilst the system was showing a nice red indicator, I had a flash back to the film 2001, HAL 9000, the throbbing LED - if I do that throbbing action in software (rather than via PWM), then if it stops, the system has crashed.

So, I have the name, its HEN 9000 and so the computer was named. Next, I also added a note to look at voice integration via the iPhone, I've got to be able to talk to Siri and say to the chicken house "open the pop hole door HEN" and get the obligatory response ... other than my name is not Dave ...