Details
Category: Who's Who 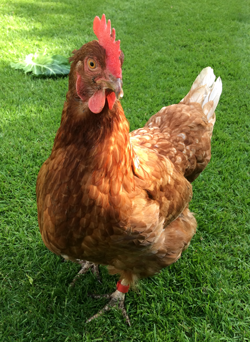 Bob (aka Broken Beak) is one of the noisiest members of the family, her name comes from what she calls herself: "Booobbb".

She gained her nickname of Broken Beak when she 'welcomed' some new members into the flock in the traditional chicken way of giving them a good pecking to show who's boss, but unfortunately she broke her upper beak (a bit like a torn fingernail), which made it a bit touch and go for a couple of weeks - could she still eat OK?, but luckily after a little TLC from the on-site nurse she's back to health, all be it with a crooked beak, which we had hoped would grow out.