Over the last couple of weeks we've been experiencing random power failures in the coop for no apparent reason. It turns out that the solar charge controller, which has the ability to turn on and off the load is powering down the system.  Initially this looked like a power related issue within the main unit or a flat battery, but when it was proven that the controller would even power up a standard 12V, 21W car bulb, then clearly something is wrong. The device just powers up and within a couple of seconds disconnects the load. 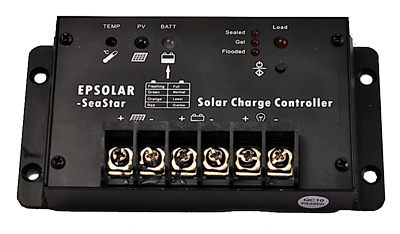 The wiring on the charge controller is idiot proof, there are 3 pairs of terminals, one for the Solar Panel, one for the Battery and one for the output load. In each case, the positive and negative is clearly marked. There is nothing to configure, except the type of the battery and the voltage (12V or 24V), which is auto-detected by the system at power up.

Due to the intermittent nature of the problem, its not initially clear if its the controller causing the problem, or if its simply reacting to something it doesn't like, but in each case, the outcome is the same, the controller does what it does best - controls the output. Having consulted the users guide, the device is complaining via its LED's about the batteries being over-voltage, which according to the manual is more than 16V, but confirmation with a DVM shows a normal 12.6V. Problems with the charge controller over a longer period would help in accounting for some of the battery charge related issues we've experienced over the last couple of months.

I source a second unit from SunStore as they provided the first unit. Once its arrived, I drop it in and Bingo - no more supply related issue, we have a dead charge controller.

Luckily, the product comes with a 2 year warranty via the retailer, so, following a discussion with SunStore, which was quick, given the replacement i had already ordered, the product was returned for testing and subsequently confirmed as dead and replaced, which is just what we need. Thanks SunStore for the professional and fast handling of the failure, you're the sort of supplier that will get repeat business and recommendations.

I note that the replacement controller has slightly different wording on the front and "V3.0" printed on the bottom of the cardboard box the unit comes in, so I'm left wondering if the manufacturer had some problems with their initial version ? For info, the V3.0 product has a blue and red logo replacing the white EPSOLAR on the front panel.