Well, it had to happen, its winter, its cold (obviously); the solar panel is in a fixed position and the sun is low in the sky, so we're just not getting the power or being able to store a sufficient amount to make this all work. The system will run for a couple of days, but then it dies in interesting and random ways, random lock-up's failures to open the door, etc. The batteries are just exhausted.

I need to improve the power generation and I'm not going to tether it from the house. Its also clear that i'm not going to get that designed, built and installed during the winter months, its just too cold.

So, a couple of 4mm jacks are installed on a bypass hook-up that takes the solar charge controller out of circuit, we can then use the car battery charger on "bike" mode (lower charge current) and with a large rubber coated, heavy grade solar panel cable that was spare, lash it up to allow charging. The negative to this is that we need a small window open and its not ideal from a heat loss perspective in the house, but we only need this every 4-5 days, and we can close the curtains to reduce heat loss, so its tolerable. The other option is to find a used car battery with a higher AH rating. We don't need the cold-cranking-Amps rating that car batteries have, just more staying power.

We need a solution that can turn the panel to follow the sun, but what to use ?

After a bit of a think and a Google, I come to the conclusion that radio hams use antenna rotators to move their aerials, so I can probably do the same with a solar panel. However, finding a good one turns out to be difficult, particularly in the UK.

The American made NTE U-105 keeps coming up along with the TB-105 additional support bearing, but as these are American units, that means imports and 110VAC power sources which I've not got, which in turn means borrowing my Dad's auto-transformer and Variac to test things and find out how they work, this also means imperial measurements and threads. 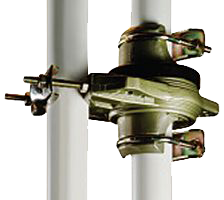 Above is the rotator, the control unit which i won't need after 10 minutes with a screwdriver. The bearing gives 2 fixing points, which I'm going to need given the large surface area of the solar panel.

Its also clear that I'll need to produce a driver, buts its a motor in a box, how hard can it be ?  According to my dad, who has an old UK model they are 1960's technology - gearboxes, switches and motors integrating that should be a doddle.

So, I order and get a roll of cable free too - nice, so its time to wait and think about how to do this now.